In a report published last April by the Royal Society titled People and the Planet, the elitist UK-based society calls for massive population reduction and de-industrialization of the west. However drenched in euphemisms, the report cannot conceal its ominous undertones. Listed among its “key recommendations” the report proposes several measures similar to the one put out recently by MIT in which a drastic reduction of the population is called for in the name of “modelling” and predictions.

Immediately after the Royal Society released its call for more death and mega-cities, none other than Paul Ehrlich weighed in to regurgitate his own eugenic fancies. The Guardian reported that Ehrlich, who contributed to the report, eagerly endorses its conclusions. In regards to redistributing wealth, Ehrlich is quite upfront about his opinion on the matter:

“They (population and resources) multiply together. You have to deal with them together. We have too much consumption among the rich and too little among the poor. That implies that terrible thing that we are going to have to do which is to somehow redistribute access to resources away from the rich to the poor.”

“How many of your support depends on lifestyles.”, Ehrlich stated. “We came up with 1.5 to 2 billion because you can have big active cities and wilderness. If you want a battery chicken world where everyone has minimum space and food and everyone is kept just about alive you might be able to support in the long term about 4 or 5 billion people. But you already have 7 billion. So we have to humanely and as rapidly as possible move to population shrinkage.”

“The question is: can you go over the top without a disaster, like a worldwide plague or a nuclear war between India and Pakistan? If we go on at the pace we are there’s going to be various forms of disaster. Some maybe slow motion disasters like people getting more and more hungry, or catastrophic disasters because the more people you have the greater the chance of some weird virus transferring from animal to human populations, there could be a vast die-off.”

Some of the conclusions of the Royal Society report:

“The most developed and the emerging economies must stabilise and then reduce material consumption levels through: dramatic improvements in resource use efficiency, including: reducing waste; investment in sustainable resources, technologies and infrastructures; and systematically decoupling economic activity from environmental impact.”

What the Royal Society terms “systematically decoupling economic activity from environmental impact” is actually a rephrasing of Agenda 21’s plan to gradually de-industrialize the west as well as the creation of megacities in which the bulk of the world’s population can be locked up to make them more manageable. Or, what the Royal Society calls “the potential for urbanisation to reduce material consumption.”

In a statement put out by “Planet Under Pressure” in the run-up to the 2012 “Earth Summit” several scientists called for denser cities in order to mitigate worldwide population growth. When in doubt that UN’s Agenda 21 is not the Mein Kampf of our day, one should consider yet another in-your-face confession from yet another certified biocratic control freak.

According to an MSNBC article one of the scientists while speaking about human populations worldwide, stated:

“We certainly don’t want them strolling about the entire countryside. We want them to save land for nature by living closely [together].” 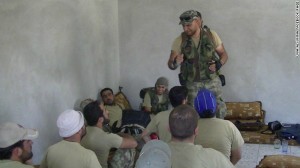 Insisting the world’s population be locked up within the confounds of mega-cities, the elite realizes that if the herd is to be properly controlled walls are needed- thick walls, and by constructing these walls, making the masses go this or that way will be made easier..

Chief scientist Michail Fragkias involved with “Planet under Pressure” told MSNBC that “the answer (to population growth) is denser cities.”

“If cities can develop in height rather than in width that would be much more preferable and environmentally not as harmful”, Fragkias said.

People who know anything about history know that the creation of mega-cities in which the masses may be rounded up and enclosed, is identical to the Nazi principle of the “ghetto” as a means of managing the masses. Every student of history may also know what happens to those masses shortly after.

Some of the organizers of “Planet under Pressure” are founding their plea on the notion that we (as humanity) have entered the “Anthropocene”: a new geological era in which humans- not natural conditions- are the main drivers of geological and meteorological processes. Citing a website devoted to this concept, Martin Rees of the Royal Society stated at the conference:

“This century is special in the Earth’s history. It is the first when one species — ours — has the planet’s future in its hands,” reported the AFP news agency. “We’ve invented a new geological era: the Anthropocene.”, he stated.

This echoes yet another scientist, a professor at the University of Colorado, who in recent times also mentioned this new era in relation to a call for population control when he stated:

“Scientists now speak of humanity’s increased demands and impacts on the globe as ushering in a new geological epoch: the Anthropocene. Such selfish and destructive appropriation of the resources of the Earth can only be described as interspecies genocide.”

In addition the professor said: “Ending human population growth is almost certainly a necessary (but not sufficient) condition for preventing catastrophic global climate change. Indeed, significantly reducing current human numbers may be necessary in order to do so.”

The call for compact cities, filled to the brim with humans, is part of the UN’s depopulation agenda. Within these proposed mega-cities humans will be allowed to use RFID technology so they can be kept in check. The rest of the world, the “countryside” as one of the scientists told MSNBC, is reserved for the elite.

Besides the call for denser cities in a, what Ehrlich calls, “battery chicken world”, the Royal Society report from April of this year also stressed that “reproductive health and voluntary family planning programmes urgently require political leadership and financial commitment, both nationally and internationally. This is needed to continue the downward trajectory of fertility rates, especially in countries where the unmet need for contraception is high.”

“Reproductive health” is a broad-sweep term including abortions (both pre- and post-natal), ant-fertility drugs and other means to cut fertility. The report clearly rehashes the old mantra that people are detrimental to the earth, and therefore human numbers should be reduced if the earth is to survive. Although the report asserts that “history has shown population growth can slow down without coercion”, it continues by saying that “timing is of the essence.”

“The sooner high fertility rates decline the sooner populations will peak. The policies and investments that are made in the coming decades will influence whether population moves towards the upper or lower boundary of population projected for the rest of the century”, the report goes on to say.

Another key recommendation: “Population and the environment should not be considered as two separate issues. Demographic changes, and the influences on them, should be factored into economic and environmental debate and planning at international meetings, such as the Rio+20 Conference on Sustainable Development and subsequent meetings.”

The report also stressed that education should be entirely brought under control of the UN:

“In order to meet previously agreed goals for universal education, policy makers in countries with low school attendance need to work with international funders and organisations, such as UNESCO, UNFPA, UNICEF, IMF, World Bank and Education for All. Financial and non-financial barriers must be overcome to achieve high-quality primary and secondary education for all the world’s young, ensuring equal opportunities for girls and boys.”

In 2004, emeritus professor of physics at California State University, Roger Dittmann, stated that all policies related to Agenda 21 should be pursued with the aim of worldwide population reduction and population control. “The Big Die Off,” the professor eagerly added, “has already begun.”

In his presentation Sustainable Development, the New International Scientific Order, and UN Reform Dittmann gives his own definition of the term “sustainable development:”

“Economic (and other) development that leads to reduction in population toward an optimum level for maximization of the quality of life, i.e. environmentally benign development that reduces the birth rate,” Dittmann explains on page 14 of his lecture notes.

Furthermore, the emeritus professor writes bluntly that (capitals by Dittmann) “The Big Die Off has already begun (page 17).”

In order to facilitate such a massive “die-off,” the professor proposes (page 18) global governance to make sure the directives will be universally applied:

“Since this is a global effort, it requires global organization, both governmental and popular,” he writes.

Dittmann’s specific remark concerning this “big die off” echoes Paul Ehrlich in response to the Royal Society’s report. Veiled threats from the most vicious of neo-eugenicists the world has ever known. I don’t have to remind readers that all this talk of death and mass-death is becoming more common every day. Only recently I highlighted the case of University College’s Emeritus Professor John Guillebaud, patron of the UK-based “Population Matters”, who depicted among other things a machine-gun, a hospital bed, and a knife dripping with blood, as examples of “natural” population control as opposed to “artificial” methods such as contraception and family planning.

Back to Dittmann’s 2004 presentation. In his notes he also calls for a new “International Scientific Order” to make sure the entire scientific community is armed and ready to implement worldwide population reduction. Dittmann:

“Not only do people require organization about their (multiple) identities (including professional, scholarly, and scientific), they need international, even supranational affiliation, facing a common adversary.”

This common adversary-remark is completely in the spirit of the Club of Rome’s 1993 The First Global Revolution in which the authors state: 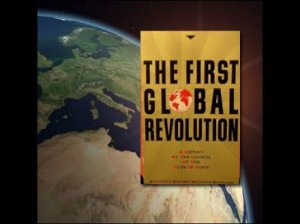 “In searching for a new enemy to unite us, we came up with the idea that pollution, the threat of global warming, water shortages, famine and the like would fit the bill….All these dangers are caused by human intervention, and it is only through changed attitudes and behavior that they can be overcome. The real enemy then, is humanity itself.”

To illustrate that in the case of professor Roger Dittmann we are not dealing with some isolated mad scientist in a cellar-lab, his own resume will suffice:

Ah UNESCO, always UNESCO. For those who think that the entire population reduction-mantra is somehow the end result of rigorous scientific thinking, the calculated, incremental and synchronized move toward a brave new world should inform them about its true origins. UNESCO’s founder, Vice President of the Eugenics Society and foremost transhumanist Julian Huxley, explained why global governance is crucial in his UNESCO: Its Purpose and Its Philosophy:

“Even though it is quite true that any radical eugenic policy will be for many years politically and psychologically impossible, it will be important for UNESCO to see that the eugenic problem is examined with the greatest care, and that the public mind is informed of the issues at stake so that much that now is unthinkable may at least become thinkable.”