Ultra elitist environmental group The Royal Society has published a series of papers to coincide with the latest round of UN climate talks, in which influential scientists suggest that politicians should force the population of the developed world to adhere to a system of rationing in order to stave off rising global temperatures. 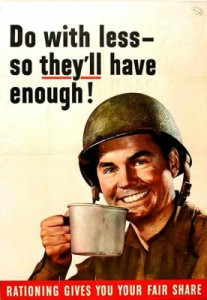 The papers suggest that 1930s and 40s style crisis rationing should be implemented by Western governments in order to reduce carbon emissions. Such a move would see “limits on electricity so people are forced to turn the heating down, turn off the lights and replace old electrical goods like huge fridges with more efficient models. Food that has travelled from abroad may be limited and goods that require a lot of energy to manufacture.” the London Telegraph Reports.

“The Second World War and the concept of rationing is something we need to seriously consider if we are to address the scale of the problem we face,” one Royal Society affiliated professor states.

Professor Kevin Anderson, Director of the Tyndall Centre for Climate Change Research, added that in his view, economic growth in the developed world should be completely halted within the next two decades if the planet is to avoid mass upheaval in the form of rising sea levels, floods, droughts and mass migration.

“I am not saying we have to go back to living in caves,” he said. “Our emissions were a lot less ten years ago and we got by ok then.”

Ironically, Anderson’s point here reveals a fundamental flaw in the theory of anthropogenic warming, namely that CO2 emissions have increased, yet temperature rise is slowing. By all accounts, the warming trend observed predominantly throughout the 1980s and 90s stopped just over a decade ago.

Even the Royal Society itself was forced to admit this fact in a recently published guide, titled ‘Climate change: a summary of the science’ which was altered following multiple complaints from 43 of the Royal Society’s own members that “knowledgeable people” were seeing through brazenly alarmist climate change rhetoric.

The Met office concurs that global warming has been slowing for some time, and the admission was also recently noted by Professor Phil Jones, the figure at the head of the Climategate scandal.

It is hardly surprising to see the Royal Society still pushing a de-industrialization agenda, however, given it’s history and cadre of members and patrons.

The Royal Society, a 350 year old establishment outfit, has traditionally been the most vocal proponent for the hypothesis of AGW.

It was the former president of The Royal Society, Lord May, who made the infamous statement “The debate on climate change is over.”

When he was head of the Society, May told government advisors: “On one hand, you have the entire scientific community and on the other you have a handful of people, half of them crackpots.”

The Royal Society has thrown its full weight behind the global warming movement, lending its absolute support for legislation aimed at reducing carbon emissions by 80%, a process that will devastate the global economy and drastically reduce living standards everywhere.

It has been even more vehement than national governments in its advocacy of the man-made cause of global warming, calling for such drastic CO2 cuts to be made in the short term, not even by the usual target date of 2050.

Not surprising then that The Royal Society was also intimately tied to efforts to Whitewash the Climategate emails scandal.

The society has also conducted extensive research into geoengineering the planet, and continually lobbies the government to divert funding into it. A recently published lengthy UK Government report drew heavily upon the Society’s research and concluded that a global body such as the UN should be appointed to exclusively regulate world wide geoengineering of the planet in order to stave off man made global warming.

This information becomes even more disturbing when you consider the mindset of those who make up the membership of the Society. It is riddled with renowned eco-fascists, open eugenicists and depopulation fanatics.

One notable member is James Lovelock, an eco-fascist who advocates ending democracy and instituting an authoritative elite to oversee global climate management and a radical stemming of the human population in order to combat climate change. He is also a patron of the Optimum Population Trust, a notorious UK-based public policy group that campaigns for a gradual decline in the global human population, which it refers to as “primates” or “animals”, to what it sees as a “sustainable” level.

Lovelock is also an ardent advocate of geoengineering. In 2007 Lovelock proposed laying vast swathes of pipes under the world’s oceans in order to pump water from the bottom of the seas – rich in nutrients, but mostly dead – to the top. The idea being that the action would encourage algae to breed, absorb more carbon and release more dimethyl sulphide into the atmosphere, a chemical known to seed sunlight reflecting clouds. Such methods are also covered in the Commons report.

Another member is Jonathon Porritt, former chair of the UK Sustainable Development Commission, one of former Prime Minister Gordon Brown’s leading green advisers, who has stated that Britain’s population must be cut in half from around 60 million to 30 million if it is to build a sustainable society.

Porritt, also a member of the Optimum Population Trust, a connection that caused raised eyebrows when it was announced that Porritt was to be a part of a forthcoming Royal Society “Objective” Global Population Study.

Also on the Royal Society’s working group for their global population study is another of their patrons, and another OPT member, BBC darling wildlife broadcaster and film-maker Sir David Attenborough. Attenborough has called for a one child policy like that of Communist China to be implemented in Britain. The proposal is one of the OPT’s main initiatives. Again, how is this man’s influence going to result in an “objective” study on population?

Another member of that working group is Cambridge economist Sir Partha Dasgupta, also a fellow of the OPT.

Professor Malcolm Potts, another member of the working group was the first male doctor at the Marie Stopes Abortion Clinic in London, he also advised on the UK’s 1967 Abortion Act.

Marie Stopes was a prominent campaigner for the implementation of eugenics policies. In Radiant Motherhood (1920) she called for the “sterilisation of those totally unfit for parenthood [to] be made an immediate possibility, indeed made compulsory.” That group, according to her, included non-whites and the poor.

Stopes, an anti-Semite Nazi sympathizer, campaigned for selective breeding to achieve racial purity, a passion she shared with Adolf Hitler in adoring letters and poems that she sent the leader of the Third Reich.

Stopes also attended the Nazi congress on population science in Berlin in 1935, while calling for the “compulsory sterilization of the diseased, drunkards, or simply those of bad character.” Stopes acted on her appalling theories by concentrating her abortion clinics in poor areas so as to reduce the birth rate of the lower classes.

Stopes left most of her estate to the Eugenics Society, an organization that shared her passion for racial purity and still exists today under the new name The Galton Institute. The society has included members such as Charles Galton Darwin (grandson of the evolutionist), Julian Huxley and Margaret Sanger.

Perhaps most notably, the head of the Royal Society’s new study, John Sulston, most famously played a leading role in the Human Genome Project, the effort to identify and map the thousands of genes of the human genome. Sulston worked under James D. Watson, a notorious eugenicist who has previously argued that black people are inherently less intelligent than whites and has advocated the creation of a “super-race” of humans, where the attractive and physically strong are genetically manufactured under laboratory conditions. Watson is also affiliated with the Royal Society, indeed, in 1993 he received the society’s Copley Medal of honour for “outstanding achievements in research in any branch of science, and alternates between the physical sciences and the biological sciences”.

Sulston is also a leading advocate of the renowned Atheist group, The British Humanist Association.

It is clear that this organisation and these people are immersed in the science of eugenics, and that they have continued the science under the guise of environmentalism. They hate humanity and any notion that their studies will represent anything other than an establishment avocation of mass depopulation is farcical.

Given the standing of the Royal Society and its ability to influence policy making on an international scale, it is imperative that the media, places of education, government representatives and the wider public are made aware of these facts.