The international bankster machine seeking to colonize Western nations through debt is now meeting resistance from Greece, to France, to Ireland, to Italy, to Spain, to Portugal, and to the U.K.

The massive protests, strikes, and riots that have swept through the streets of many European countries have resulted in growing calls to reject the bailout money used to prop up failed banks and corrupt governments. 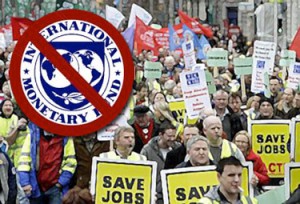 These new protests in Ireland and Italy follow a crippling 2-week strike in France where citizens took over fuel refineries and other vital infrastructure, more strikes in Greece which took over the Acropolis, and a massive student protest in the UK that caused physical damage to government buildings. All of these protests were sparked by governments reducing benefits or increasing fees and taxes on a population that had little to do with the private gambling of banks.

These European protests are intensifying as the international bankers move to collect their “pound of flesh” through austerity and sale of public assets.  As Europeans are becoming acutely aware of the dubious plan to loot them and the anger at their corrupt elected officials for bowing to banks has reached a boiling point.  In all cases the governments are enforcing austerity measures on the people after the private banks over-leveraged themselves to the breaking point, threatening to bring down entire nations.

For years the bankers churned out easy credit to these nations while they invested public and private funds into worthless credit default swaps and derivatives. As if orchestrated to perfection, they pulled the plug on those toxic assets, essentially bankrupting the more fragile developed countries, followed by calling their debts due.  Now they’re demanding that European governments be forced into IMF bailouts that impose drastic austerity measures on the populace.

By forcing tax increases and reducing benefits for the citizens of sovereign nations, the IMF is essentially rewriting their laws.  Well, it appears that the citizens of Europe have had enough.  The massive protests, strikes, and riots that have swept through the streets of many European countries have resulted in growing calls to reject the bailout money used to prop up failed banks and corrupt governments.  The Irish people prefer to default on the debt which drove the EU ‘completely mad’.

The protesters are getting support from someone who is experiencing the outcome of resisting public bailouts of private banking debts.  The President of Iceland recently remarked that they’re in much better shape than Ireland because they let the private banks fail and their currency naturally devalued, allowing them to regain some competitiveness relative to their neighbors:

“The difference is that in Iceland we allowed the banks to fail,” Grimsson said in an interview with Bloomberg Television’s Mark Barton today. “These were private banks and we didn’t pump money into them in order to keep them going; the state did not shoulder the responsibility of the failed private banks.”

UK’s Libertarian politician, Nigel Farage, once viewed as a fringe player, is now getting international recognition for forewarning his European comrades about the troubles in the system.  He’s quickly becoming a hero to the banker resistance as his credibility reaches new heights for being proved right — much like his U.S. counterpart Congressman Ron Paul. His rants in the European Parliament are going viral on YouTube as the people are waking up to their servitude to banks and a lack of true democracy and sovereignty.

Nigel Farage speaks with such confidence against the EU, as he should, given that a recent mainstream media poll showed 99% of UK citizens want out of the Euro.  The battle against the banking cartel is clearly happening with Europe as the spearhead.  As Europeans continue to fight back against corrupt international banksters, lazy Americans continue to live with a much lower standard of living and do nothing to challenge the system.

The rage in Europe and quiet streets in America is causing the euro to fall against the dollar.  The dollar was all but declared dead in the lead-up to the Fed’s QE2, but now the eurozone debt crisis has taken center stage.  The European Council is set to meet again this December to amend the Lisbon Treaty to essentially legalize more bailouts.  Some insiders are calling it an impossible mission to get all European countries to agree on fair amendments.  The outcome of these December meetings will assuredly be pivotal in determining whether the euro “experiment” will survive.