We are witnessing the beginning of “the industrial revolution of war” 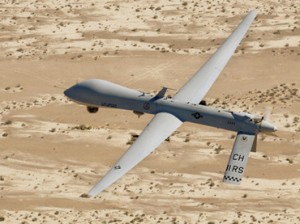 A prominent artificial intelligence expert has urged that president Obama is setting a horrendous precedent by embracing drone technology as a means of covert warfare.

Professor Noel Sharkey of Sheffield University, penned a piece in The Guardian today that slams the use of missile strikes using unmanned ariel vehicles, warning that what we are seeing is just the beginning of “the industrial revolution of war.”

Sharkey notes that the CIA is thought to have killed anywhere up to 1035 civilians in drone strikes outside of legitimate war zones in the last eight years, including 200 children.

“Who in their right mind would give a powerful unmanned air force to a covert organisation with such a track record for unaccountable and illegal killing?” the professor asks.

“Obama is establishing a dangerous precedent that is, at best, legally questionable in a world where more than 50 countries are acquiring the technology.” he adds.

Sharkey warns that in a modern day arms race, other countries such as Israel, India, Russia and especially China are racing to develop and export armed attack drones.

“Given the 10-year spate of CIA drone strikes, what can be said when other countries use drone strikes against perceived threats in other states?” Sharkey asks.

Sharkey, a founding member of the International Committee for Robot Arms Control (ICRAC), also noted that current drones are “like the Wright brothers’ prototypes compared to what’s coming next.”

“Here is where the real danger resides: automated killing as the final step in the industrial revolution of war – a clean factory of slaughter with no physical blood on our hands and none of our own side killed.” he writes, noting that automated drones have been under development since at least 2004.

“We have records of civilian casualties, including numerous children, from drone strikes when there are humans watching on computer screens and deciding when to fire.” Sharkey notes. “Think how much worse it will be when drones deal death automatically. Is this really a technology we want the secret intelligence services of the world to control?”

Professor Sharkey previously appeared on the Alex Jones Show in 2008, when he warned that the world was sleepwalking into a potentially lethal technocracy and called for safeguards on such technology to be put into place.

“If you have an autonomous robot then it’s going to make decisions who to kill, when to kill and where to kill them.” Sharkey stated at the time. “The scary thing is that the reason this has to happen is because of mission complexity and also so that when there’s a problem with communications you can send a robot in with no communication and it will decide who to kill, and that is really worrying to me.” the professor said.

“The one thing I try to get across to policy makers is that there is this kind of mythical artificial intelligence, every time killer robots are mentioned people start talking about Terminator and ‘Skynet’ and all this stuff that’s really fairytales, and if they were like that it would be better, because what you’ve got here is like a washing machine. This is a dumb stupid machine, and then you are going to give it the decision to kill people, it’s just ridiculous.” Sharkey told listeners.

As we noted this week, a new 62 feet long autonomous drone called the X-47B is set to become an integral part of the Navy’s Unmanned Carrier Launched Airborne Surveillance and Strike System (UCLASS).

The new drone was unveiled during its first public test flight over Chesapeake Bay this week. The craft was airborne for 35 minutes and reached an altitude of 7,500 feet, traveling at 207 mph.

The Navy wants to eventually have the aircraft take off and land onto an aircraft carrier hundreds of miles away, all with just the click of a mouse. This would make it the only craft of its kind to have that ability.

The drone is controlled by an onboard Control Display Unit which, it is said, can independently think for itself, plot course corrections, react to unforeseen contingencies, and chart new directions.

District Judge Joel Medd denied a request to dismiss charges against Rodney Brossart, who was arrested after law enforcement resorted to using a Unmanned Aerial Vehicle (UAV) to inspect his property, according to court documents obtained by US News.

Steve Watson is the London based writer and editor for Alex Jones’ Infowars.com, and Prisonplanet.com. He has a Masters Degree in International Relations from the School of Politics at The University of Nottingham in England.