U.S. troops now being trained to boss communities and run local governments are being readied to oversee a post-collapse America in which riots and civil unrest similar to that now exploding in Europe over austerity measures and pension cuts ravage the United States and are met with the iron fist of a militarized police state. 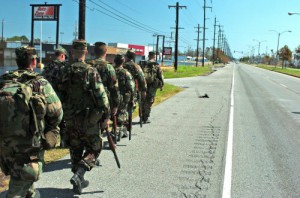 Reaction to our earlier story about the 3rd Brigade Combat Team, 10th Mountain Division being prepared for a situation where “in essence they will become the local government” by working with local officials has been strong, with some refusing to believe that the program is geared towards anything other than operations overseas.

However, as we outlined in our article, similar deployments by Northcom are admittedly focused around “homeland patrols” and training troops to deal with “civil unrest” and “crowd control”.

We have documented numerous incidents over the past several years where active duty troops or national guard have been used in domestic law enforcement operations.

The military are now being called upon to undertake roles normally designated to police as Americans are incrementally acclimated to accept the presence of troops on the streets as an everyday occurrence, in preparation for them to be used should the United States enter a post-collapse period of turmoil and unrest.

We covered a case in Kingman Arizona last September, where National Guardsmen were filmed “providing security” and directing traffic.

Another example occurred in Newport Kentucky, when military checkpoints suddenly appeared downtown on September 6 last year. Military Police from the U.S. Army National as well as Marines were purportedly conducting “traffic control” because the city was strapped for funds and did not have enough police to do the job.
The excuse that troops are stepping in to help because there is a lack of police doesn’t wash. Crime is down over the last 20 years, there are around three times more police and the state is not calling out the National Guard, they are being put on the streets as a result of the harmonization of police and military, a process that has been ongoing for decades, long before the economic recession hit. Troops also have guns and their primary function is to search people and vehicles, not direct traffic.

Members of the WeAreChange Ohio group interviewed some of the troops, who when asked if they would be prepared to “confiscate guns, shoot resisters in the back of the head, or throw people into ovens to incinerate bodies,” refused to categorically deny that they would follow such orders.

However, this was by no means the first time that troops have been used to fulfill roles normally ascribed to police in Kentucky.

During the Kentucky Derby on May 2 last year, Military Police were on patrol to deal with crowd control. An Associated Press photograph shows armed MP’s detaining a man who ran onto the track following the 135th Kentucky Derby horse race at Churchill Downs.

“The military has NO BUSINESS policing the citizens except during extraordinarily exceptional times of national emergency by an executive order. This is very disturbing and completely un-American. Maybe even more disturbing is that no one seems to care how quietly and easily we have accepted the burgeoning police state,” one respondent to the photo stated.

As we reported in 2008, U.S. troops returning from Iraq are now occupying America, running checkpoints and training to deal with “civil unrest and crowd control” under the auspices of a Northcom program that by 2011 will have no less than 20,000 active duty troops deployed inside America to “help” state and local officials during times of emergency.

Over the course of the last few of years, we have reported on numerous instances of military involvement with local law enforcement in violation of Posse Comitatus.

In January 2009, soldiers from the Virginia National Guard. Soldiers from the Lynchburg-based 1st Battalion, 116th Brigade Combat Team, were used to conduct personal searches at checkpoints in Washington DC for the inauguration of Barack Obama.

In February, no less than 2,200 U.S. Marines were also involved in urban operations training in Richmond, VIrginia, throughout January, drills that involved landing troops in populated areas, allowing military pilots to “familiarize themselves with the area.”

In March of that year, we reported on U.S. Army troops dispatched to patrol the streets of Samson, Alabama, after a murder spree.

On April 6, we reported on a DHS, federal, state, Air Force, and local law enforcement checkpoint in Tennessee. On April 3, Infowars was instrumental in the cancellation of a seatbelt checkpoint that was to be conducted in conjunction with the Department of Homeland Security and the 251st Military Police in Bolivar, Tennessee.

In December 2008, we reported on the Marine Corps Air and Ground Combat Center dispatching troops to work with police on checkpoints in in San Bernardino County, California.

On April 22, we reported the deployment of 400 National Guard Combat Support Battalion troops to “maintain public order” at the Boston Marathon.

In June, Infowars posted an article by D. H. Williams of the Daily Newscaster reporting the deployment of 2,300 Marines in the city of Indianapolis under the direction of FBI and the Department of Homeland Security.

We also reported a story on April 22 covering the assault of a local television news team by an irate police officer in El Paso, Texas. A video taken by the news videographer shows uniformed soldiers working with police officers at the scene of a car accident.

The presence of uniformed and armed military police is part of an ongoing campaign to acclimate the populace to the presence of soldiers at public events.

Northcom was only relatively recently assigned its own fighting unit – the Army’s 3rd Infantry Division’s 1st Brigade Combat Team, which had been fighting in Iraq for five years before that. As we have previously reported, the Armed Forces Press Service initiated a propaganda campaign designed to convince the American people that deploying the 3rd Infantry Division in the United States in violation of the Posse Comitatus Act is a good thing, with images of soldiers from the brigade helping in “humanitarian” rescue missions, such as car wrecks. This is all designed to condition Americans to accept troops on the streets and highways as a part of everyday life.

The assignment of the 1st Brigade Combat Team to Northcom alarmed the American Civil Liberties Union (ACLU). “This is a radical departure from separation of civilian law enforcement and military authority and could, quite possibly, represent a violation of law,” said Mike German, ACLU national security policy counsel.

The last time the the national guard and military worked with FEMA and local law enforcement on a large scale in the United States was during Hurricane Katrina, when they aided in the confiscation of privately owned firearms of citizens, even those who lived in the high and dry areas and were unaffected by the hurricane.

In August last year it was reported that the Pentagon was attempting to “grant the Secretary of Defense the authority to post almost 400,000 military personnel throughout the United States in times of emergency or a major disaster,” wrote Matthew Rothschild for The Progressive.

“In June, the U.S. Northern Command distributed a “Congressional Fact Sheet” entitled “Legislative Proposal for Activation of Federal Reserve Forces for Disasters.” That proposal would amend current law, thereby “authorizing the Secretary of Defense to order any unit or member of the Army Reserve, Air Force Reserve, Navy Reserve, and the Marine Corps Reserve, to active duty for a major disaster or emergency.”

Collating all the evidence of how the military has been seamlessly ingrained into the daily lives of Americans by way of uniformed troops undertaking law enforcement duties, there can be no doubt that the U.S. is already under a condition of undeclared martial law.

This has nothing to do with Afghanistan or Iraq – this is about turning America into a militarized police state in anticipation of widespread rioting.

Only by becoming aware of how far America has sunk into a militarized police state can we begin to reverse the incremental conditioning that has led Americans to accept the sight of troops on the streets demanding their papers.

It is important to understand that we are witnessing a deliberate collapse of society where the shrinking middle class is left with no other option but to riot in a last ditch effort to salvage their rapidly evaporating wealth.

We are already seeing tensions build in France and other areas of Europe as part of the growing backlash against austerity measures and government seizure of pensions. Now the government is preparing to openly loot all private 401(k) pension funds, which could be the straw that breaks the camel’s back and turns once passive Americans into angry mobs.

In November 2008, right as the economic implosion was unraveling, the U.S. Army War College released a white paper called Known Unknowns: Unconventional ‘Strategic Shocks’ in Defense Strategy Development. The report warned that the military must be prepared for a “violent, strategic dislocation inside the United States,” which could be provoked by “unforeseen economic collapse,” “purposeful domestic resistance,” “pervasive public health emergencies” or “loss of functioning political and legal order.” The “widespread civil violence,” the document said, “would force the defense establishment to reorient priorities in extremis to defend basic domestic order and human security.”

Authorities have also made preparations for deploying troops to round up Americans in the aftermath of an immigration influx should Mexico completely collapse, which is a very real prospect.

During the Iran Contra hearings in the 80’s, previously classified information came to light about Continuity of Government (CoG) procedures in times of national crisis. The masterminds behind these programs were Oliver North, Donald Rumsfeld and Dick Cheney. The Rex-84 ‘readiness exercise’ discussed the plan to round up immigrants and detain them in internment camps in response to uncontrolled population movements across the Mexican border.

The real agenda was to use the cover of rounding up immigrants and illegal aliens as a smokescreen for targeting political dissidents and American citizens. From 1967 to 1971 the FBI kept a list of persons to be rounded up as subversive, dubbed the “ADEX” list.

Since 9/11, shadow government and CoG programs that were outlined in Rex-84 have been activated, including mass warrantless wiretapping of American citizens.

According to respected author Peter Dale Scott, “Both the contract and the budget allocation are in partial fulfillment of an ambitious 10-year Homeland Security strategic plan, code-named ENDGAME, authorized in 2003. According to a 49-page Homeland Security document on the plan, ENDGAME expands “a mission first articulated in the Alien and Sedition Acts of 1798.” Its goal is the capability to “remove all removable aliens,” including “illegal economic migrants, aliens who have committed criminal acts, asylum-seekers (required to be retained by law) or potential terrorists.”

Let us be under no illusion that U.S. troops are being trained to target the American people, and when similar scenes to those currently unfolding in Europe hit U.S. streets, the response is going to be a whole lot more brutal, which is why active duty soldiers who have been occupying Iraqi and Afghan cities for the past several years are now being brought home to deal with Americans whose anger over foreclosures, seized pensions, a collapsing dollar and mass unemployment will ultimately reach boiling point as the descent into depression becomes overwhelming.