Scientists now admit that emissions from aircraft are forming artificial clouds that block out the sun, precisely what geoengineering advocates like top eugenicist and White House science advisor John P. Holdren have called for, but the article tries to insinuate that the effect is caused by natural “vapours,” when in reality it can be attributed to chemtrails that contain substances harmful to humans. 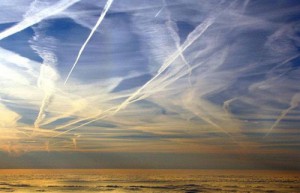 “The phenomenon occurs when aircraft fly above 25,000ft, where the air temperature is around minus 30C. This causes water vapour emitted by the engines to crystallise and form the familiar white streaks across the sky, known as contrails,” writes Oliver Tree for the Daily Mail.

“Reading University’s Professor Keith Shine, an expert in clouds, said that those formed by aircraft fumes could linger ‘for hours’, depriving those areas under busy flight paths, such as London and the Home Counties, of summer sunshine.”

“Experts have warned that, as a result, the amount of sunlight hitting the ground could be reduced by as much as ten per cent. Professor Shine added: “Over the busiest areas in London and the South of England, this high-level cloud could cover the sky, turning bright sunshine into hazy conditions for the entire area. I expect the effects will get worse as the volume of air traffic increases.”

The report also makes reference to a 2009 Met Office study which found that high-level winds did not disperse contrails that later formed into clouds which covered an astonishing 20,000 miles.

Of course, this is no natural phenomenon as the article claims. Ten years ago, contrails from jet aircraft disappeared within minutes, yet apparently we are led to believe that the same substance is now causing the trails to linger for hours and form into clouds. This is impossible without something within the substance having been changed.

Mainstream science and academia has gone from dismissing chemtrails as a fantasy of paranoid conspiracy theorists to now accepting that they exist but claiming that they are natural and not artificially induced.

In reality, chemtrails are the consequence of the agenda to geoengineer the earth in the name of combating climate change, a science vehemently backed by people like John P. Holdren, who in his 1977 book Ecoscience advocated poisoning the water supply to involuntarily sterilize humans as part of a “planetary regime” that would control every aspect of our existence. The fact that such eugenicists are now in control of geoengineering programs that will have a direct impact on our health is alarming.

Geoengineering programs have also been promoted by the Council on Foreign Relations, which is one of the main steering committees behind the implementation of global governance.

A recent report issued by the UK government also calls for the UN to exclusively regulate world wide geoengineering of the planet in order to stave off man made global warming.

Discussion of geoengineering technology is often framed as a future consideration, yet governments are already conducting such programs at an advanced stage.

The Atmospheric Radiation Measurement (ARM) Program was created in 1989 with funding from the U.S. Department of Energy (DOE) and is sponsored by the DOE’s Office of Science and managed by the Office of Biological and Environmental Research.

One of ARM’s programs, entitled Indirect and Semi-Direct Aerosol Campaign (ISDAC), is aimed at measuring “cloud simulations” and “aerosol retrievals”.

Another program under the Department of Energy’s Atmospheric Science Program is directed towards, “developing comprehensive understanding of the atmospheric processes that control the transport, transformation, and fate of energy related trace chemicals and particulate matter.”

The DOE website states that, “The current focus of the program is aerosol radiative forcing of climate: aerosol formation and evolution and aerosol properties that affect direct and indirect influences on climate and climate change.”

U.S. government scientists are already bombarding the skies with the acid-rain causing pollutant sulphur dioxide in an attempt to fight global warming by “geo-engineering” the planet, despite the fact that injecting aerosols into the upper atmosphere carries with it a host of both known and unknown dangers.

The proposal to disperse sulphur dioxide in an attempt to reflect sunlight was discussed in a September 2008 London Guardian article entitled, Geoengineering: The radical ideas to combat global warming, in which Ken Caldeira, a leading climate scientist based at the Carnegie Institution in Stanford, California, promoted the idea of injecting the atmosphere with aerosols.

“One approach is to insert “scatterers” into the stratosphere,” states the article. “Caldeira cites an idea to deploy jumbo jets into the upper atmosphere and deposit clouds of tiny particles there, such as sulphur dioxide. Dispersing around 1m tonnes of sulphur dioxide per year across 10m square kilometres of the atmosphere would be enough to reflect away sufficient amounts of sunlight.”

Experiments similar to Caldeira’s proposal are already being carried out by U.S. government -backed scientists, such as those at the U.S. Department of Energy’s (DOE) Savannah River National Laboratory in Aiken, S.C, who last year began conducting studies which involved shooting huge amounts of particulate matter, in this case “porous-walled glass microspheres,” into the stratosphere.

The project is closely tied to an idea by Nobel Prize winner Paul Crutzen, who “proposed sending aircraft 747s to dump huge quantities of sulfur particles into the far-reaches of the stratosphere to cool down the atmosphere.”

Such programs merely scratch the surface of what is likely to be a gargantuan and overarching black-budget funded project to geo-engineer the planet, with little or no care for the unknown environmental consequences this could engender.

What is known about what happens when the environment is loaded with sulphur dioxide is bad enough, since the compound is the main component of acid rain, which according to the EPA “Causes acidification of lakes and streams and contributes to the damage of trees at high elevations (for example, red spruce trees above 2,000 feet) and many sensitive forest soils. In addition, acid rain accelerates the decay of building materials and paints, including irreplaceable buildings, statues, and sculptures that are part of our nation’s cultural heritage.”

The health effects of bombarding the skies with sulphur dioxide alone are enough to raise serious questions about whether such programs should even be allowed to proceed.

The following health effects are linked with exposure to sulphur.

– Effects on eyes and eyesight

– Damage to liver and kidney functions

– Disturbance of the hormonal metabolism

According to the LennTech website, “Laboratory tests with test animals have indicated that sulfur can cause serious vascular damage in veins of the brains, the heart and the kidneys. These tests have also indicated that certain forms of sulfur can cause foetal damage and congenital effects. Mothers can even carry sulfur poisoning over to their children through mother milk. Finally, sulfur can damage the internal enzyme systems of animals.”

Fred Singer, president of the Science Environmental Policy Project and a skeptic of man-made global warming theories, warns that the consequences of tinkering with the planet’s delicate eco-system could have far-reaching dangers.

“If you do this on a continuous basis, you would depress the ozone layer and cause all kinds of other problems that people would rather avoid,” said Singer.

Even Greenpeace’s chief UK scientist – a staunch advocate of the man-made global warming explanation – Doug Parr has slammed attempts to geo-engineer the planet as “outlandish” and “dangerous”.

Stephen Schneider of Stanford University, who recently proposed a bizarre plan to send spaceships into the upper atmosphere that would be used to block out the Sun, admits that geo-engineering could cause “conflicts between nations if geoengineering projects go wrong.”

Given all the immediate dangers associated with bombarding the atmosphere with sulphur dioxide, along with the unknown dangers of other geo-engineering projects, many people are concerned that “chemtrails” are a secret component of the same agenda to alter the Earth’s eco-system.

The fact that chemtrails are blocking out the sun, which is precisely what the geoengineering advocates call for, strongly indicates that they are an integral part of this dangerous and wide-reaching program. 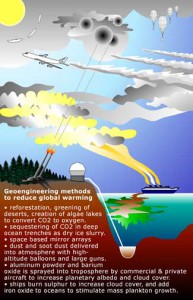 This graphic proposes, “Spraying aluminum powder and barium oxide into high levels of the atmosphere, again delivered by aircraft, to increase planetary reflectance (albedo) and cloud cover.” High levels of barium have been found in substances associated with chemtrails.

Reports of chemtrails, jet plumes emitted from planes that hang in the air for hours and do not dissipate, often blanketing the sky in criss-cross patterns, have increased dramatically over the last 10 years. Many have speculated that they are part of a government program to alter climate, inoculate humans against certain pathogens, or even to toxify humans as part of a population reduction agenda.

In conducting Google searches, one finds discussion, such as this example, of using sulphur dioxide as a jet fuel additive to be dispersed over the world during routine commercial flights.

“I suggest that both the sulphur dioxide and the silica particles could be delivered into the stratosphere by dissolving an additive in jet aviation fuel,” writes engineer John Gorman, who has conducted experiments to test the feasibility of such a scenario.

“We would want to burn fuel containing the additive specifically when the aircraft was cruising in the lower stratosphere,” he adds.

In 2008, a KSLA news investigation found that a substance that fell to earth from a high altitude chemtrail contained high levels of Barium (6.8 ppm) and Lead (8.2 ppm) as well as trace amounts of other chemicals including arsenic, chromium, cadmium, selenium and silver. Of these, all but one are metals, some are toxic while several are rarely or never found in nature.

The newscast focuses on Barium, which its research shows is a “hallmark of chemtrails.” KSLA found Barium levels in its samples at 6.8 ppm or “more than six times the toxic level set by the EPA.” The Louisiana Department of Environmental Quality confirmed that the high levels of Barium were “very unusual,” but commented that “proving the source was a whole other matter” in its discussion with KSLA.

KSLA also asked Mark Ryan, Director of the Poison Control Center, about the effects of Barium on the human body. Ryan commented that “short term exposure can lead to anything from stomach to chest pains and that long term exposure causes blood pressure problems.” The Poison Control Center further reported that long-term exposure, as with any harmful substance, would contribute to weakening the immune system, which many speculate is the purpose of such man-made chemical trails.

Indeed, barium oxide has cropped up repeatedly as a contaminant from suspected geoengineering experimentation.

KSLA also put aerosolized-chemical testing in its historical context, citing a voluminous number of unclassified tests exposed in 1977 Senate hearings. The tests included experimenting with biochemical compounds on the public. KSLA reports that “239 populated areas were contaminated with biological agents between 1949 and 1969.”

One of the accepted truisms of scientific study is the fact that if scientists are proposing an idea, then those scientists with access to the bottomless pit of black-budget secret government funding are already doing it.

It is highly likely that chemtrails are merely one manifestation of “geo-engineering” that is taking place without proper debate, notification or any form of legality, and with a callous disregard for the potential dangers to both our health and our environment.