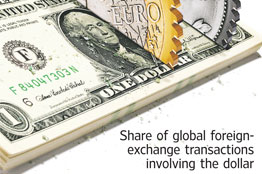 President Barack Obama has instructed the Pentagon to reposition U.S. military forces around Libya as the administration prepares to exploit a humanitarian crisis to seize de facto control over the largest oil producing country in the continent of Africa, following the advice of top neo-cons who have urged Obama to use U.S. forces to topple the Gaddafi regime.

Meanwhile, the Obama administration has openly stated its intention to aid Libyan rebels fighting to overthrow Gaddafi, publicly confirming that the revolution has the full blessing and support of the US military-industrial complex.

“We’ve been reaching out to many different Libyans who are attempting to organize in the east and, as the revolution moves westward, there as well,” Secretary of State Hillary Clinton said today en route to Geneva, where she is due to meet with the foreign ministers of six major world powers to discuss imposing sanctions as well as a no fly zone on Libya.

As happened under Bill Clinton during years of sanctions against Iraq, such measures will only deepen the suffering of the population and will do nothing to avert the humanitarian crisis. They will however weaken Gaddafi’s political position, enhancing the swift success of any US-backed coup.

The first decade of sanctions imposed on Iraq were directly responsible for the deaths of half a million children. “We think the price is worth it,” Clinton’s Secretary of State Madeleine Albright infamously stated at the time.

The price will again be “worth it” in the eyes of the US military-industrial complex, as any regime change achieved with the assistance of the United States will provide deeper access to a country that holds the largest amount of oil reserves in Africa and the tenth largest in the world, with a reserve to production ratio of around 66 years.

Stock up with Fresh Food that lasts with eFoodsDirect (AD)

In targeting Libya for military assault, Obama is following orders just like Bush did before him from top neo-conservatives from the Foreign Policy Initiative (FPI), the successor to the infamous Project for the New American Century (PNAC) group that called for domination of the Middle East and North Africa on the back of “a new Pearl Harbor,” just one year before 9/11.

FPI members wrote a letter to Obama on Friday in which they demanded that the United States “immediately” prepare military action to overthrow Gaddafi.

As we have highlighted, with the Rand Corporation and other globalist think tanks desperate to reap the dividends of more military adventures while the United States itself collapses into a decaying, bankrupt banana republic, Obama is set to play the “humanitarian crisis” card as a ruse with which to insert U.S. forces into the volatile region, exactly as we predicted he would back in November 2008, before he even took office.

As we have warned, the wave of revolutions spreading like wildfire across the Middle East and North Africa have been hijacked by globalist interests in the name of re-shaping the region for the administrative convenience of the new world order. Their ultimate target is Iran, where a similar contrived “color revolution” almost succeeded in toppling Mahmoud Ahmadinejad’s government in 2009.