Once again the Western press preys on the ignorance of the population as a whole, freely admitting that a Turkish jet entered Syrian airspace (later confirmed here) but was “a mile into international waters” by the time it was shot down. 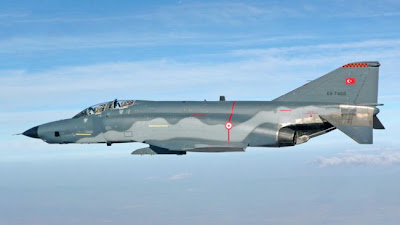 Image: A Turkish F-4 – manufactured by the US and last used in major combat operations in Iraq to destroy air defenses, Syria had every right to fire on this aircraft as it entered Syrian airspace. Even if claims by Turkey are true that it had retreated to a “mile” over international waters when it was destroyed, that would mean it was over international waters for a mere 2 seconds. This means whatever ordnance Syria used was already fired and airborne in Syrian airspace before the aircraft departed.

Any anti-aircraft weapon fired against Turkey’s admittedly “off course” fighter aircraft would have certainly been fired while the aircraft was well within Syrian airspace with the fired ordnance airborne and on course to intercepting the aircraft before the aircraft traveled back over international waters. Turkey’s claim of being “a mile” within international airspace may seem reasonable to the average reader accustomed to traveling at speeds where a mile is relatively far, but in terms of air combat, a mile equates into seconds.

Turkey, acutely aware of the immense tensions it itself has cultivated with neighboring Syria, exercised reckless abandon by traveling so closely to Syrian airspace. What readers may also be unaware of is the role US-built F-4′s play in scouting out and neutralizing air defense systems. Designated “wild weasels,” F-4′s had been extensively used in the opening phases of war against Iraq in 1991, flying 2,596 sorties, firing more than 1,000 air-to-ground missiles, and destroying more than 200 targets in a campaign aimed at destroying Iraqi air defenses.

Perhaps hoping the average reader is profoundly ignorant to how speeds, trajectories, and weapons of modern warfare work, the press has attempted to portray the downing of the F-4 as a provocative act carried out entirely over international waters. In reality, Turkey’s jet was fired upon in Syrian airspace, by its own account, as it was supposedly in “international space” for only one or two seconds before finally being struck. Syria claims the entire event took place over Syrian waters – a claim NATO has been unable to refute with anything more substantial than mere rhetoric.

Turkey has been admittedly harboring, arming, and supporting terrorists within its borders to destabilize neighboring Syria, according to US policy makers. Turkey has also made multiple threats against Syria, threatening partial invasion and conducting blockades. When a Turkish fighter crossed into Syrian airspace, Syria had every right to believe it was merely the next stage of military escalation implemented by NATO through its member-state Turkey.

Compounding Turkey’s provocative violation of Syria’s airspace, at the loss of one of its fighters, it with NATO’s explicit backing, is trying to escalate an already unjustified posture of war and aggression against Syria. The United Nations has been characteristically mute over these brazen violations of world peace as the West pursues openly a campaign to overthrow the government of Syria and replace it with a suitable proxy regime of its own preference.

Turkey has been fighting its own internal war against its population – one that has stretched from 1984 and has cost over 40,000 lives – dwarfing UN estimates based solely on activist hearsay. Turkey’s campaign against its own Kurdish minority has involved rolling armored columns over them, strafing them from the air with warplanes, and even chasing them into Iraqi territory with partial invasions and bombing campaigns sanctioned by the then occupying US military.

Turkey – a NATO member since 1952 – is a serial violator of human rights within its own borders and a violator of the sovereignty of its regional neighbors. For it and its NATO collaborators to pose as the rational forces of stability in the region is a true spectacle of Orwellian absurdity.

Had Syrian President Bashar al-Assad’s forces kidnapped and murdered journalists sympathetic to the West’s narrative – relentless accusations of “crimes against humanity” and referrals to the West’s myriad of “international institutions” and self-proclaimed international arbiters would have followed. However, the killers are instead NATO-backed terrorists, if not NATO operatives themselves, who have raided a TV station, murdered employees and kidnapped others in an attack celebrated rather than condemned by the Western press as “one of the boldest attacks yet on a symbol of the authoritarian state” (Reuters).

Despite the rhetoric emanating from the West in regard to Syria’s “deterioration,” the fact that statements released by both Russia and Syria are intentionally being distorted, as well as events on the ground themselves being endlessly misrepresented, indicates such rhetoric aims more at psychologically attacking the Syrian people, rather than actually encapsulating actual events as they unfold. Similar psychological ploys had been used against Libya to great effect where otherwise outgunned and disorganized fighters were handed victory by a demoralized and divided Libyan government.

In Syria, Unity & Perseverance is Key

Imperialism’s favorite trick throughout time has been to purposefully mire a targeted nation in internal strife to weaken it before preying on, and ruling over both sides. This can be seen encapsulated in the following ancient Chinese stratagem:

When a country is beset by internal conflicts, when disease and famine ravage the population, when corruption and crime are rampant, then it will be unable to deal with an outside threat. This is the time to attack. –The 36 Strategies, #5 Loot a Burning House

While it would likewise suit Syrian President Bashar al-Assad’s opponents, it is particularly important for those who have made the decision to stand by Syria’s ruling government to stay the course of restoring order and pursuing political solutions. NATO is systematically destabilizing Syria, sowing the ground for an easy victory if and when more overt military intervention is attempted.

The West has gone too far, the credibility of its “institutions” and their operational capacity are waning by the day, it has no choice but to continue pushing forward in hopes that all before it lack the fortitude to stand up and fight. The West will not stop until either Syria is divided and destroyed or the West itself crumbles in the midst of its untenable imperial conquest. Defection, capitulation, and failure are not options. Libya has proven that surrendering to the will of the West ensures not stability and survival, but ensured perpetual violence, destabilization, and chaos. Syria’s fate will be that of Libya, Iraq, Afghanistan, or worse if it falls. Unity is Syria’s only option.