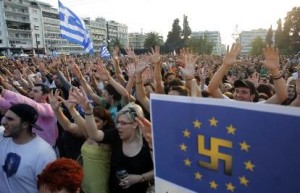 During a speech in 2006, Soviet dissident Vladimir Bukovksy referred to classified documents held by the Politburo and the Central Committee. The confidential documents spelled out a plan to turn Europe into a totalitarian super-state. In 1989, during a visit by a Trilateral Commission delegation sent to convince Mikhail Gorbachev to turn Russia over to globalist loan sharks at the World Bank and IMF, the former French president Giscard d’Estaing told Gorbachev: “I cannot tell you exactly when it will happen – probably within 15 years – but Europe is going to be a federal state.” This was several years before the signing of the Maastricht treaty creating the European Union.
“How the hell did Giscard d’Estaing know what was going to happen in 15 years time?” Bukovksy asked during his speech. “And surprise, surprise, how did he become the author of the European constitution? A very good question. It does smell of conspiracy, doesn’t it?”

EU moving the scour internet of its political enemies.

Six years after Bukovksy’s revelation, we are witnessing the final phase of “European integration” as a bankster devised economic crisis sweeps the continent. On Saturday, the president of the Czech Republic, Václav Klaus, told The Telegraph that “two-faced” politicians are paving the way for the EU super-state. “We need to think about how to restore our statehood and our sovereignty. That is impossible in a federation. The EU should move in an opposite direction,” he said.

Alas, what also is impossible in a Federation is for a banker-controlled entity to provide money out of thin air, i.e., public debt, which dilutes the “common currency” in the process preserving the illusion that credit-fueled growth (the only kinds the world has seen since the advent of the Federal Reserve) can continue for ever, when in reality all that is happening is the ongoing dilution of sovereignty alongside the destruction of individual currencies. This is precisely what the status quo, i.e., the above-mentioned company headquartered at 200 West [Goldman Sachs], wants.

“And what the status quo wants it always gets, absent a revolution,” Zero Hedge explains.

In order to make sure a revolution does not meddle with the bankster dream of totalitarian domination, a secret police is required.

In 2006, Bukovksy said the EU did not yet have its own KGB or gulags, but eventually would. “Today’s ideology of the European Union is social-democratic, statist, and a big part of it is also political correctness. I watch very carefully how political correctness spreads and becomes an oppressive ideology,” he said. Bukovksy predicted “a fully fledged Europol staffed by former Stasi or Securitate officers. Anything may happen.”

Because the revolution in 2012 uses the internet as an informational and organizational tool, it has become a target for EU apparatchiks and their new EU Stasi secret police.

“The Internet plays a central role and is of great strategic importance for terrorists and extremist networks. These networks know that propaganda is a critical tool for generating funding, recruits and support for their cause within these communities,” declares The Clean IT Project, a public-private partnership (hence fascist) “in direct cooperation between member-states and the Internet business.”

“During the past decade of huge global growth of the Internet, Al Qaida influenced extremists for example, have made increasing use of this medium,” the EU website explains (note: the word “al-Qaeda” is now shorthand for anybody who opposes the state, i.e., “white al-Qaeda”). “The Internet and its fast and anonymous means can contribute to individual radicalization processes. There are concerns about the use of the Internet for terrorist purposes… The question is if we can reduce the impact of the use of Internet for terrorist purposes [organizing in opposition to the EU and the state in general], without affecting our online freedom. Therefore this project is based on a public-private [corporatist or fascist] dialogue.”

The EU is working to build with the cooperation of its “public-private” telecom partners a sprawling Stasi-like tattle-tale system. EU officialdom is “preparing proposals for ‘semi automated detection’ systems and buttons to allow users to report suspicious activity on social networks and chatrooms to authorities,” according to The Telegraph. “Providers of chat boxes, email services, messaging systems, social networks, retailing sites, voice over internet protocol and web forums must have flagging systems,” a report produced by The Clean IT Project states.

In addition, a direct police presence will be integrated into social media. “This includes having a profile, joining user groups, sending and receiving messages, on the platform,” the document states.

In the United States, the government is working feverishly under the cover of cybersecurity to turn the internet into a facile entertainment platform where any meaningful political dialogue falling outside restrictive parameters set by the state – and enforced through public-private fascist arrangements – will be impossible.

After the Senate failed to pass so-called cybersecurity legislation, the Obama administration declared it will once again violate the Constitution and issue an executive order imposing legislation by imperial fiat.