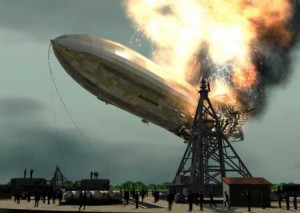 UBS Financial Services Director Art Cashin says that we’ll know within 3 or 4 weeks whether the dreaded Hindenburg Omen, a set of market factors that precede a stock market collapse, will unfold as many are now predicting.

The Hindenburg Omen, named after the May 1937 Hindenburg disaster during which the German zeppelin LZ 129 Hindenburg suddenly caught fire and was destroyed, is a technical analysis that, when fulfilled, portends a greater likelihood of a stock market collapse.

Although conditions for the Hindenburg Omen have been met previously without a subsequent stock market crash, there has never been an actual crash without it being preceded by a Hindenburg Omen.

Zero Hedge summarizes the five criteria for the Hindenburg Omen to be in effect that have now been met.

Financial forecaster Gerald Celente, who has a proven track record in being accurate, told a radio show on Saturday that the stock market would crash before the end of 2010, appearing to confirm the worst consequences of the Hindenburg Omen.

David Buik at BGC Partners is another market analyst raising the alarm over the Hindenburg Omen, which he describes as “easily the most feared technical pattern in all of chartism”. Ominously choosing Friday the 13th as the date on which he drew attention to the matter, Bulk warned that the technical outlook suggests a stock market collapse is imminent.

When asked by CNBC what his advice would be for traders, UBS’ Art Cashin said that investors should be “very cautious” because “there’s been a lot of buzz in the street about the Hindenburg Omen – that’s when you have a very large amount of 52-week highs and 52-week lows, which tells you that the market is confused,” adding that “It bears watching, it’s a bit of a warning—it isn’t confirmed, but we will know in the next 3 or 4 weeks.”

Watch the clip from CNBC below.