China has warned the United States against engaging in military activity on its coastline.

“We oppose any military act by any party conducted in China’s exclusive economic zone without approval,” China’s Foreign Ministry replied in response to a question about the inclusion of a U.S. Aircraft carrier strike group participating in the joint exercise.

The exclusive economic zone is a maritime zone up to 200 nautical miles from a country’s coast.

It was reported today that Obama would be speaking with his Chinese counterpart Hu Jintao in coming days. China has refused to condemn North Korea’s attack.

North Korea warns of a “shower of dreadful fire” in response to the joint U.S.-South Korean exercises. 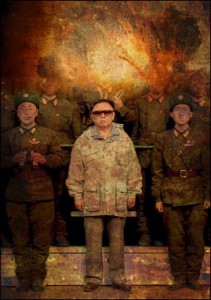 The Chinese statement arrives ahead of U.S.-South Korean naval exercises, according to Reuters. Earlier in the week, the Pentagon sent the USS George Washington and four other Navy ships to the Yellow Sea after North Korea shelled South Korean soldiers and civilians in response to South Korean military exercises.

In a statement from the U.S. Navy’s Seventh Fleet, the military exercises are described as a measure to show the United States’ “commitment to regional stability through deterrence.” Joint military exercises with the South Koreans begin on Sunday. North Korea has promised “waves of retaliation” if provoked.

Asian experts and political commentators warn the provocative military exercises near the North Korean and Chinese borders may result in war on the Korean Peninsula. North and South Korea have engaged in heightened saber-rattling since the incident earlier in the week.

On Friday, North Korea engaged in artillery drills within sight of the island bombed last week. The attack killed two soldiers and two civilians. Gen. Walter Sharp, the U.S. commander in South Korea, was on the island touring the damage at the time. “None of the latest rounds hit the South’s territory, and U.S. military officials said Sharp did not even hear the concussions,though residents on other parts of the island panicked and ran back to the air raid shelters where they huddled earlier in the week as white smoke rose from North Korean territory,” reports the Associated Press.

“The situation on the Korean peninsula is inching closer to the brink of war,” a report issued by the North’s official Korean Central News Agency said. Pyongyang’s military “precisely aimed and hit the enemy artillery base” on the island as punishment for South Korean military drills, said a North Korean official, who also warned of a “shower of dreadful fire” in response to the joint U.S.-South Korean exercises. “Gone are the days when verbal warnings are served only.”

North Korea has the largest artillery force in the world. It maintains 80,000 special forces and is believed to have some 13,000 artillery pieces deployed along the border.

In South Korea, the situation has resulted in political chaos.

Following the shelling of Yeonpyeong Island, South Korean president Lee Myung-bak accepted the resignation of his defense minister and ordered more troops and advanced weaponry to the maritime border with North Korea. “We should not ease our sense of crisis in preparation for the possibility of another provocation by North Korea,” spokesman Hong Sang-pyo said, quoting the South Korean president. “A provocation like this can recur any time.” Myung-bak appointed his security adviser Lee Hee-Won as his new defense minister.

“The South Korean media is baying for blood (or at least air strikes), the South Korean defense minister has fallen on his sword, and extra troops have been posted on the outlying islands,” writes Peter Foster for the Telegraph.

“If the North Koreans continue to act in this provocative way, it’s fair to ask the question, where does that all end in terms of South Korea’s ability to simply continue to turn the other cheek,” said Australian Foreign Minister Kevin Rudd. “This question goes to the heart of the political and security order of the world, [and] it’s important, I believe, for China to step up to the plate,” said Rudd after talking to the U.S. secretary of state, Hillary Clinton.

“The pressing task now is to put the situation under control and prevent a recurrence of similar incidents,” said Chinese Foreign Minister Yang Jiechi today after talking with Clinton by phone. Yang Jiechi also spoke with the South Korean foreign minister and the North Korean ambassador to China.