Yet another 9/11 video that NIST tried to block from being released has emerged discussing bombs in the World Trade Center that led to the collapse of the twin towers, indicating once more that the organization attempted to preside over a cover-up to hide evidence of secondary explosives.

Every single video that we have been able to study following a lawsuit brought by the International Center for 9/11 Studies, which forced the National Institute of Standards and Technology to release 3 terabytes of material, has contained either direct or eyewitness evidence of controlled demolition, suggesting that NIST’s refusal to release the footage after a FOIA request was a deliberate ploy to try and keep the material out of the public arena. 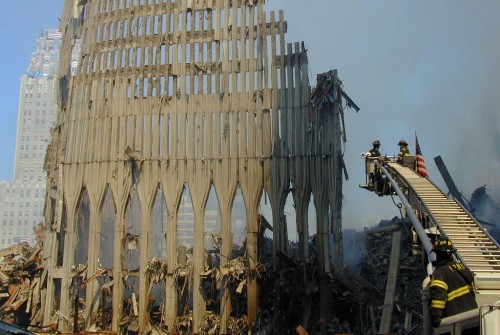 On Wednesday we reported on how footage of WTC 7’s collapse had been edited to try and hide evidence of controlled demolition.

The new clip features CBS 2 reporter Marcia Kramer discussing a CNN report about secondary explosions inside the ground level areas of the south tower which caused the building to collapse.

Kramer refers to WTC 1 but is in fact talking about the south tower, which was the first to collapse. The live footage on the clip shows the smoking north tower still standing.

“Again there was a third explosion, it is unclear what caused it, whether it was a bomb or whether the first plane that crashed into the tower had somehow been booby trapped with a bomb that was timed to explode later after the crash had occurred. But CNN is reporting that there was a third explosion that caused World Trade Center 1 to collapse within itself,” she adds.

The video dovetails with another clip that NIST attempted to sit on, in which 9/11 firefighters describe secondary explosions in the lobby area of the tower that caused the building to collapse.

As we highlighted last week, numerous eyewitnesses, including WTC janitor William Rodriguez, supervisor Anthony Saltalamacchia, and ABM janitorial services employee Kenneth Johannemann, all described explosions in the basement area of the towers before and after they were hit by planes.

15-year WTC worker Marlene Cruz and numerous other WTC basement workers, including Felipe David and Salvatore Giambanco, have all gone public since the attacks to talk about secondary explosions in the lower levels of the towers.

The 9/11 Commission completely ignored the hundreds of survivors, professionals, first responders, firefighters and police who reported numerous secondary explosions at all levels of the twin towers.

The official story dictates that the collapse of both towers began at the impact point where the planes hit the buildings. Evidence of ground level explosions that contributed to the collapse of the towers would not corroborate with the government’s insistence that the attack was solely the work of 19 hijackers acting on behalf of Osama bin Laden, which is presumably why NIST fought tooth and nail to prevent this and other videos from being released.