Evidence indicating that the collapse of the World Trade Center was a controlled demolition has been propelled back under the national spotlight following the University of Copenhagen’s announcement that dust obtained from the rubble of the twin towers contains evidence of highly explosive material.

The energetic material that was found in the WTC dust by an international team of scientists led by Niels Harrit of the University of Copenhagen in Denmark, consists of “nano-engineered iron oxide and aluminum particles” that “exhibit the same characteristics as advanced energetic materials developed in US national laboratories in the years leading up to 9/11.” 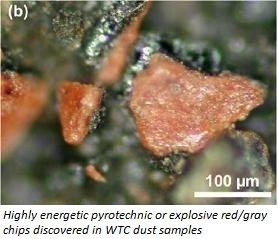 The red chips have “no reason to be in this dust” points out an Architects & Engineers for 9/11 Truth story concerning the samples and could not have been naturally formed from either the impact of the jetliners nor the collapse of the towers, unless a highly pyrotechnic explosive was used to implode the buildings.

“This follows the discovery, by the United States Geological Survey and others, of high concentrations of unusual previously molten iron-rich microspheres in the WTC dust. These microspheres can only have been formed during the destruction of the World Trade Center at temperatures far higher than can be explained by the jet fuel and office fires. Those fires, we are told by engineers employed by NIST, the National Institute of Standards and Technology, were allegedly the cause of the World Trade Center’s destruction. The discovery of this advanced energetic material, in the form of red/gray chips distributed throughout the dust, both explains the iron-rich microspheres and confirms the inadequacy of the official account of what happened that tragic day.”

The implosion of the towers as well as WTC 7 has also received fresh attention as a result of NIST being forced to release hundreds of hours of video footage from its investigation into the collapse of the buildings.

Every single piece of footage we have studied thus far since the Journal of 9/11 Studies was forced to file a lawsuit against NIST to obtain the material has contained eyewitness testimony of controlled demolition, from firefighters who were in the lobby of the World Trade Center, to news reporters on the ground, to people filming ground zero from nearby high rise buildings.

The controlled demolition of the World Trade Center has also been a hotly debated topic of conversation after numerous appearances on CNN and Fox News by Conspiracy Theory host and former Governor Jesse Ventura.

Ventura angrily reminded Fox Business host Eric Bolling that, just like 9/11, the Gulf of Tonkin was a staged event designed the lead the United States to war, during a confrontation following Ventura’s interview on the Follow The Money show.

Our recent investigative articles into the newly released NIST tapes are linked below.

Did NIST Edit WTC 7 Footage To Hide Evidence Of Implosion?