Since too often financial articles consist of some stooge blathering on and on with opinions instead of facts, I thought today we’d simply focus on some FACTS about our current financial system which few if any want to acknowledge.

#1: The US Fed is now the second largest owner of US Treasuries.

That’s right, this week we overtook Japan, leaving China as the only country with greater ownership of US Debt. And we’re printing money to buy it. Setting aside the fact that this is abject lunacy, this policy is trashing our currency which has fallen 13% since June… as in four months ago. Want an explanation for why stocks, commodities, and Gold are exploding higher? Here it is. 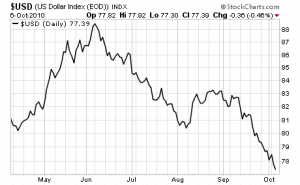 #2:  “There are only about $550 billion of Treasuries outstanding with a remaining maturity of greater than 10 years.”

This horrifying fact comes courtesy of Morgan Stanley analyst David Greenlaw. And it confirms what I’ve been saying since the end of 2009, that the US has entered a debt spiral: a time in which fewer and fewer investors are willing to lend to us for any long period of time… at the exact same time that we must roll over trillions in old debt and issue an additional $100-150 billion in NEW debt per month in order to finance our massive deficit.

And only $550 billion of the debt we’ve got to roll over has a maturity greater than 10 years!?!?

So we’re talking about TRILLIONS of old debt coming due in the next decade. The below chart depicting the debt coming due between 2009 and 2039 comes courtesy of the US Treasury itself. In plain terms, we’ve got some much debt that needs to be rolled over that you can’t even fit it on one page and still read it.

#3: The US will Default on its Debt

… either that or experience hyperinflation. There is simply no other option. We can NEVER pay off our debts. To do so would require every US family to pay $31,000 a year for 75 years.

Bear in mind, I’m completely ignoring the debt we took on with the nationalization of Fannie and Freddie, AIG, and the slew of other garbage we nationalized or shifted onto the Fed’s balance sheet. And yet we’re STILL talking about every US family making $31,000 in debt payments per year for 75 years to pay off our national debt.

Obviously that ain’t going to happen.

So default is in the cards. Either that or hyperinflation (which occurs when investors flee a currency). Either of these will be massively US Dollar negative and horrible for the quality of life in the US. But they’re our only options, so get ready.

PS. If you’re worried about the future of the stock market and have yet to take steps to prepare for the Second Round of the Financial Crisis… I highly suggest you download my FREE Special Report specifying exactly how to prepare for what’s to come.

I call it The Financial Crisis “Round Two” Survival Kit. And its 17 pages contain a wealth of information about portfolio protection, which investments to own and how to take out Catastrophe Insurance on the stock market (this “insurance” paid out triple digit gains in the Autumn of 2008).

Again, this is all 100% FREE. To pick up your copy today, got to http://www.gainspainscapital.com and click on FREE REPORTS.