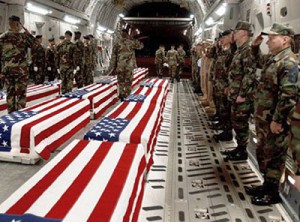 Obama’s “end of Iraq war” speech must have shattered any remaining belief in him. Forced to appease both his supporters and the warmonger right-wing, who denounce him as a Muslim and a Marxist, Obama resorted to Orwellian DoubleSpeak. He could only announce an end to the war by praising the president who started it and the troops who fought it. Yet, as most earthlings, if not Americans, surely know by now, the war was based on a lie and on intentional deception. The American troops died for a lie.

President Obama spoke of the cost to Americans of liberating Iraq, but is Iraq liberated or is Iraq in the hands of American puppet politicians and still occupied by 50,000 American troops and 200,000 private mercenaries and “contractors,” governed out of the largest embassy in the world, essentially a fortress?

President Obama did not speak of the cost to Iraqis of being “liberated.” The uncounted Iraqi deaths, estimates of which range from 100,000 to 1,000,000, most being women and children, were not mentioned. Neither were the uncounted orphaned and maimed children, the four million displaced Iraqis, the flight from Iraq of the professional middle class, the homes, infrastructure, villages and towns destroyed, along with whatever remained of America’s reputation.

All of this was left out of the picture that Obama painted of America’s “commitment” to Iraq which brought Iraqis “peace” and liberated Iraqis from Saddam Hussein in order that that a destroyed Iraq can now be an American puppet state and take its orders from Washington.

As it is impossible for the U.S. government to any longer pretend that the invasion of Iraq was necessary to save America from weapons of mass destruction and al Qaeda terrorists, the U.S. government’s justification for its massive war crime has come down to removing Saddam Hussein, who, like the Americans, tortured his opponents.

Does anyone on earth, even among the most moronic of the flag-waving American super-patriots, believe that the bankrupt United States government spent three trillion borrowed dollars to remove one man, Saddam Hussein, in order to free Iraq from tyranny? Anyone who believes this is insane.

Saddam Hussein would have resigned for far less money had it been offered to him.

The executive branch has exercised unilateral, unaccountable power to deep-six the U.S. Constitution, with little interference from the judiciary and with support from Congress. The executive branch has declared foreign opponents of America’s illegal invasions and occupations of their countries to be “terrorists,” subject neither to the laws of war nor to the criminal laws of the U.S. and, therefore, subject to indefinite torture and detention without charges or evidence.

This is the legacy of the Bush/Cheney regime, and this criminal regime continues under Obama.

America’s “war on terror,” a fabrication, has resurrected the unaccountable dungeon of the Middle Ages and the raw tyranny that prevailed prior to the Magna Carta.

This is the true cost of “liberating” Iraq, that is, of turning Iraq into an American puppet state that sells out its people for America’s interests.

Who will now liberate Americans from the Bush/Cheney/neoconservative/Obama tyranny?

President Obama asserts that America’s war crimes have come to an end in Iraq, but Obama asserts the power to export America’s war crimes to Afghanistan in order to reign in what the CIA director says are “fifty or less” al Queda members remaining in Afghanistan. Bankrupt Americans will now be saddled with another three billion dollars of debt in order to chase after “fifty or less” alleged terrorists. To cover up this extraordinary waste of borrowed money, Obama, following the dishonest practices of prior American regimes, equated al Qaeda with the Taliban, a home-grown movement of hundreds of thousands of Afghans seeking to unify the country.

The least expensive way to combat “terrorists” would be to stop trying to create an American empire in the Middle East and Central Asia and to stop imposing American puppet states on indigenous populations.

The bought-and-paid-for-European-puppet states, who preen themselves with their superior morality, fall in line with Washington, obeying their American master who fills their pockets with dollars. The West having fought tyranny since the Magna Carter, now imposes tyranny both on itself and on the rest of the world.

If HItler and Stalin had prevailed, what would be the difference? Is the Obama regime going to shoot the “enemies of the state,” condemned without trial or evidence, by shooting them in the front of the head instead of in the back of the neck, as was the practice in the Lubyanka?

What other difference is there?