Congressman indicates that worsening financial picture could re-ignite the Revolution 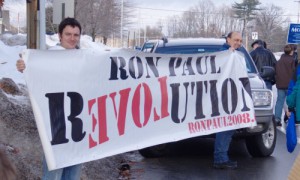 Congressman Ron Paul has indicated that he will embark on a bid to become President in 2012 if the economic crisis worsens and leads to a dollar collapse, hinting for the first time that the Ron Paul Revolution, which was the grass roots precursor to the Tea Party, will once again be ignited as it was to such great fervor in 2008.

“Events can change quickly, and I believe sincerely we’re moving toward a much more major economic crisis. Depending on where we are on that might help me make that decision,” said Paul, who gave a speech to Tea Party enthusiasts in Richmond Virginia this past weekend.

The Congressman said that a further financial collapse was “95% likely… [because] right now the whole world is racing to beat their currencies because they think it’s going to help trade…But let me tell you, if the bombs started to fall on Iran, hold your hat, because that would be, I believe, the end of our dollar system. And we would have a real skirmish to find out what we’re going to replace this government with.”

Though Paul denied it had any connection with a White House bid, the Congressman is set to speak at the University of Iowa later this month, “An appearance many pundits have pegged as his first WH stump in the critical caucus state,” points out HotlineOnCall’s Lindsey Boerma.

Political commentator and friend of Paul, New Jersey Star Ledger writer Paul Mulshine, is as certain as he can be that the Congressman will run.

“I’ve been covering him longer than any journalist I know…..I never bet more than a six-pack of beer on politics. But from Paul’s recent remarks, I’m willing to stake six cold ones on a bet that he’s running,” writes Mulshine, noting that Paul is in good physical shape for a man of 75 and is more energized than ever before.

Mulshine also points out that the field will be full of candidates who claim to be real conservatives but who in fact are liberal internationalists by the very nature of the policies they advocate – easy pickings for someone who has embraced true constitutional principles his entire life.

It looks like the field for the 2012 GOP presidential nomination is filled with candidates who espouse the essentially left-wing view that it is the role of the United States government to straighten out the politics of every country on Earth. So Paul is perfectly suited to be the sole candidate pushing the traditional conservative position against foreign entanglements.

Can you imagine the fun of pointing out real right-wing policies to a field full of liberal internationalists who don’t even know they’re liberal internationalists? I don’t think Paul can resist the opportunity to be on the debate stage listening to Newt Gingrich talk about how great Woodrow Wilson and Franklin Roosevelt were. Then there’s the chance to hear Sarah Palin tell us why we should be going to war over South Ossetia or some other obscure place she knows nothing about.

And then there’s the opportunity of debating Mitt Romney on the question of how the health-care plan he pioneered in Massachusetts differs from Obamacare. Hint: It doesn’t.

Looking back to the last election may provide us with a better indication of the timing. Paul announced his 2008 campaign in January 2007, suggesting that any announcement regarding 2012 is likely to be made in early 2011.

Whether or not it will sway his decision, there’s no doubt that the vast majority of Ron Paul’s supporters are eager for the Congressman to once again hit the campaign trail. A poll conducted on one fan site which attracted over 6,000 votes came out 92% in favor of Paul running in 2012.

Watch the full video of Ron Paul’s Richmond speech below.