U.S. President Barack Obama said he will ask Congress to approve $205 million for the controversial Iron Dome anti-missile system that at least one expert has called a “scam.” The president’s move comes shortly after the return of Defense Minister Ehud Barak from a warm welcome in Washington and Barak’s repeated hints at weakening the Likud’s dominance in the coalition.

The Iron Dome system is touted as being able to stop rockets from Gaza and Lebanon, but by all accounts, it cannot intercept primitive and short-range Kassam rockets that explode within two miles of firing and within 20 seconds of detection. 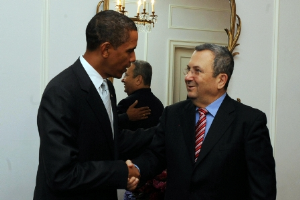 The missile program has faced budgetary obstacles in Israel, and the timing of the Pentagon announcement of President Obama’s request comes a few days after Barak’s audible suggestions that the Netanyahu government needs to be widened.

White House officials have denied that President Obama has been trying to undermine Prime Minister Binyamin Netanyahu and cause his coalition to collapse in favor of Kadima leader Tzipi Livni.

Three weeks ago, President Obama’s and U.S. Secretary of State Hillary Clinton’s extremely warm reception for Barak, with media profile, was in sharp contrast to the chilly greeting he gave Prime Minister Netanyahu less than two months ago. In an unusual diversion from protocol at that time, the president did not host the Prime Minister for a lunch or dinner, did not hold a news conference and did not provide the media with opportunities for photographs.

Since Barak’s return, he has frankly stated at least twice that widening the coalition would help advance the process for creating a new country headed by the Palestinian Authority, a high priority issue for President Obama.

American aid of $205 million for the Iron Dome program would be a political coup for Barak, whose Labor party has only 13 seats in the coalition and is internally divided.

The Iron Dome system has passed several successful tests this year, but it has not been a high priority item for the IDF. Missile tests have proven that the system is effective against Katyusha rockets, and Barak has boasted the system “will allow the IDF to fulfill its obligation to protect Israel in the best way that it can.”

However, he has made no mention of the system’s inability to defend Gaza Belt residents against Kassam rockets. Backing him is the commander of the Israel Air Force’s northern air defense division, who recently said, “We cannot promise 100 percent hermetic defense, but what we can promise is that after years of rocket fire against Gaza-belt communities, there will now be an effective solution.”

Tel Aviv University professor and military analyst Reuven Pedatzur disagrees. He has harshly criticized the Iron Dome as being overly expensive and under-effective. “Considering the fact that each Iron Dome missile costs about $100,000 and each Kassam $5, all the Palestinians would need to do is build and launch a ton of rockets and hit our pocketbook,” he recently stated at a conference organized to campaign against faulty defense systems.

Prof. Pedatzur labeled the Iron Dome a “scam” and explained, “The flight-time of a Kassam rocket to Sderot is 14 seconds, while the time the Iron Dome needs to identify a target and fire is something like 15 seconds. This means it can’t defend against anything fired from fewer than five kilometers; but it probably couldn’t defend against anything fired from 15 kilometers, either.”

The Iron Dome is being built by Israel’s Rafael Advanced Defense Systems. Their chief executive officer Yedidia Yaari and chairman Ilan Biran are long-time and close acquaintances of Barak.  (IsraelNationalNews.com)