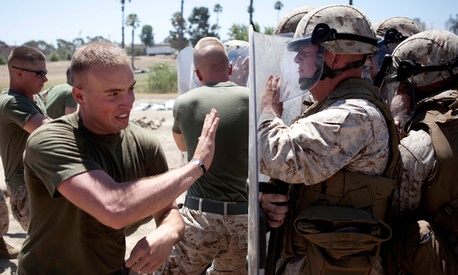 Units of hundreds of military police officers trained to investigate crimes have been created by the marine corps and will “assist local authorities” in securing crime scenes and building cases, reports the Associated Press.

The report notes that “The battalions will be capable of helping control civil disturbances, handling detainees, carrying out forensic work, and using biometrics to identify suspects.”

While the units, each comprising 500 military police officers and dozens of dogs, will “deploy worldwide”, recent forays by the military into domestic policing in the United States may have some Americans wondering if the newly created “law enforcement battalions” will be used at home.

Maj. Jan Durham, commander of the 1st Law Enforcement Battalion at Camp Pendleton told the AP that marines deployed in Afghanistan and Iraq have increasingly acted as police, in addition to their combat duties. Durham noted that the policing role will now be cemented as a permanent feature of the US marine corps.

The 1st, 2nd and 3rd Law Enforcement Battalions were activated last month and will be based out of Camp Pendleton, Calif.; Camp Lejeune, N.C.; and Camp Hansen in Okinawa, Japan; respectively.

According to the report, the law enforcement battalions will convene at a Southern Command conference in Miami next month and showcase their services to government officials from Central American countries, such as Guatemala, Honduras, El Salvador and Belize.

Former Marine Corps prosecutor Gary Solis noted that “complications” may arise from a gray area between police officer and soldier.

“Cops apply human rights law and Marines apply the law of war,” Solis said. “Now that it’s blended, it makes it tougher for the young men and women who have to make the decision as to when deadly force is not appropriate.” he added.

Despite the constitutional protections outlined in the Posse Comitatus Act and the Insurrection Act, there has been and is on ongoing push to blur the divisions between military and domestic law enforcement officials in the United States.

Such “invasions” are often reported on as nothing to worry about and even as “cool”.

Indeed, back in 2008 the Washington Post reported how 20,000 U.S. troops returning from Iraq would be stationed inside America under Northcom for purposes of “domestic security” from September 2011 onwards.

Northcom officials were forced to subsequently issue a denial after the Army Times initially reported that the troops would be used to deal “with civil unrest and crowd control.”

As Alex Jones exposed back in the late 1990’s, U.S. troops have been training to impose martial law for a considerable amount of time. During numerous urban warfare drills that Jones attended and reported on, troops were trained to raid, arrest and imprison U.S. citizens in detention camps as well as taking over public buildings and running checkpoints. During role playing exercises, actors playing prisoners would scream “I’m an American citizen, I have rights” as they were being dragged away by troops.

The fact that such drills are now set to involve Russian soldiers training on U.S. soil to hunt “terrorists” has also caused consternation.

Federal authorities in the United States have clearly been preparing for domestic civil unrest for a number of years. The Department of Homeland Security recently purchased a staggering 450 million rounds of hollow point bullets as well as bullet-proof checkpoint booths that include ‘stop and go’ lights.

In addition, worrying legislation such as the National Defense Authorization Act, has paved the way for the incarceration of American citizens under military laws, and numerous leaked and semi-secret documents position the army as partners to domestic federal agencies in quelling unrest in America and even engaging in missions involving the ”resettlement” of US citizens.

Think tanks and other elite groups routinely raise the spectre of using the army to plan and carry out domestic law enforcement missions in the US.

Steve Watson is the London based writer and editor for Alex Jones’ Infowars.com, and Prisonplanet.com. He has a Masters Degree in International Relations from the School of Politics at The University of Nottingham in England.