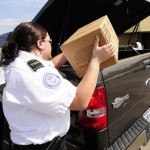 The lawmaker behind a bill aimed at curtailing TSA grope downs and naked body scanners warns that Americans will be subjected to such harassment on sidewalks and at football games if the TSA is not stopped in its tracks now, but in reality, TSA-style measures have already been aggressively expanded well beyond airports.

Republican Rep. David Simpson’s bill in the Texas legislature would classify any search without probable cause as an act of sexual harassment, while naked boded scanner images would be deemed criminal voyeurism.

“We’re talking about what would be a criminal act in any other place,” Rep. David Simpson (R) told Raw Story. “If you viewed someone naked without their permission or consent, or as a condition of travel, it would be sexual harassment or voyeurism. If you touched people’s privates, that would be sexual assault.

“This is not a left or right issue,” he added. “They are treating American citizens with great indignity, and we’ve got to make this right.”

Almost entirely mimicking protections already supposedly guaranteed by the Constitution, Simpson’s bill would characterize “offensive touching” which happens as “part of a search performed to grant access to a publicly accessible building or form of transportation,” as a state jail felony.

“Unless there’s reason to believe someone has an explosive or intends to commit a criminal act, you shouldn’t be treating them as a criminal and that’s what we’re doing. It’s un-American and it needs to stop. C.S. Lewis once wrote … that tyranny exercised for the good of its victims may be the most oppressive, and I agree with him. They’re trying to make us think we’re safer, but we’re not.”

“It needs to stop somewhere,” said Simpson. “If we don’t nip this thing in the bud it’s gonna come to our sidewalks, to our football games.”

However, TSA-style security harassment is already being aggressively expanded outside the domain of airports.

In Philadelphia, you don’t have to visit the airport to have the government molest you, TSA-style “stop, question and frisk” pat downs are already being conducted by police on the streets targeting people who act suspicious, by doing things like putting their hands in their coat pocket.

As we have repeatedly warned, everything unfolding in the airports, from naked radiation body scanners to pat downs, is now being implemented on mass transit as well as every major street corner in America. Constitutional protections of privacy and immunity from unreasonable search and seizure have been abolished and replaced with guilty until proven innocent.

Stock up with Fresh Food that lasts with eFoodsDirect (AD)

Last month, TSA goons conducted grope downs of passengers, including young boys, at Savannah train station, despite the fact that the travelers were disembarking from their train and trying to leave the station having completed their journey. After the incident received national attention, TSA officials lied about the event, claiming passengers had been free to leave, when in fact they were swarmed by TSA agents and ordered to submit to the search as soon as they stepped onto the platform.

As we reported earlier last year, as the national outrage surrounding the TSA’s use of naked body scanners at airports simmered, the feds had already purchased hundreds of x-ray scanners mounted in vans that were being used to randomly scan vehicles, passengers and homes in complete violation of the 4th amendment and with wanton disregard for any health consequences.

With the devices already being used at highway checkpoints, DHS chief Janet Napolitano has now publicly outlined the plan for mobile scanners to be used on all forms of transit, from trains and the metro to boats.

These inspection stations are now being expanded to normal roads and highways, unleashing an army of TSA agents who will be given a free hand to litter America with internal checkpoints in a chilling throwback to Soviet-style levels of control over the population.

Simpson’s warning that the TSA will eventually be stationed at football games and other public events is already in the works. Since the launch of the Department of Homeland Security’s “See Something, Say Something” program, the DHS has released promotional material which depicts would-be TSA agents conducting searches at public events, including a Buccaneers football game. After we wrote an article on the subject, the TSA pulled the You Tube videos from the web which showed the pat downs at football games.

Indeed, all fans entering the Cowboys Stadium for last month’s Super Bowl final were subjected to grope downs, bag searches, and had to pass through metal detectors.

Homeland Security is also developing technology to be used at “security events” which purports to monitor “malintent” on behalf of an individual who passes through a checkpoint. The video below explains how “Future Attribute Screening Technology” (FAST) checkpoints will conduct “physiological” and “behavioral” tests in order to weed out suspected terrorists and criminals.

The clip shows individuals who attend “security events” being led into trailers before they are interrogated as to whether they are terrorists while lie detector-style computer programs analyze their physiological responses. The subjects are asked about their whereabouts, and if they are attempting to smuggle bombs or recording devices into the “expo,” proving that the technology is intended to be used at public events and not just airports. Individuals who do not satisfy the first lie detector-style test are then asked “additional questions”.