I am not here to debate, just pass real information concerning chemical spraying from jets known as Chemtrails. 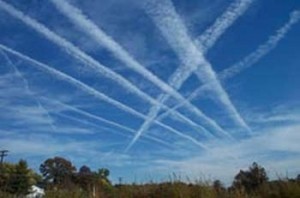 Yes, the government constantly denies such a thing and calls people like myself conspiracy nut jobs. But when confronted and caught red handed, they go and say that they are to protect us from (the fraud) Global Warming or the Military will go and say they spray to block out enemy radar and satellites when deploying troops or launching an operation.

I would like anyone, believer or non-believer, to download this PDF file called HR 2977 The Space & Preservation Act of 2001. In this document the United States Government openly admits the existence of Chemtrails and weather control weapons; also, to boot, Mass Mind Control Weapons and Techtronic Laser Weapons. Please download this Bill and print out for your records.

This next document is an article from USA Today from Feb 25th, 2011 titled Can Geoengineering put the freeze on global warming? The article admits that Chemtrails and Geoengineering exist, but it’s done to protect us from Global Warming.

Still not convinced?? What if I told you that there are patents for these very such things. This was released on December 5th, 2010 Spraying the Skies: 1975 U.S. Patent for Powder Contrail Generation with patents dating back all the way to March 1st, 1927.

This is just the tip of the iceberg; there are so many other documents to prove such things exist.

I myself am a pilot for over 10 years and have worked in the aviation field for about the same amount of years; from a professional point of view, I can say that there is a huge difference between condensation (con-trail) and a chemical trail (chemtrail). A condensation trail dissipates as the jet moves along; a chemical trail will stay and expand into man-made clouds used for various weather experiments loaded with toxic chemicals that we breathe in on a daily basis.

Chemicals include:
Arsenic, aerosol, barium, depleted uranium, high levels of mercury, aluminum and several other toxic chemicals. These are a huge cause in most respiratory breathing problems in America. I did a beta test on how many cases of an ambulance being called within a 8-hour period from respiratory problems, people of all ages infant to elderly that can’t breathe. I worked in a facility in Springfield, MA where I monitored operations and a police-fire scanner. I monitored an average of 8-13 calls every day within that 8-hour period of people who could not breathe.

Once these chemicals are sprayed, several hours later they descend towards ground level and the human body inhales these toxic fumes. You may ask if wearing a gas mask is safe — well, you may protect your lungs, but also remember that plants breathe these chemicals in as well, affecting your foods grown and water you drink, along with the already added poison sodium fluoride and all its derivatives incorporated by your friends at Monsanto.

Related: Cost of Chemtrail Program Put At $5 Billion a Year

For more information on chemtrails and the sinister agenda behind them, watch the powerful documentaries What in the World Are the Spraying? (WATCH BELOW) and Why In the World Are They Spraying?, or support the filmmakers and Infowars by purchasing a copy at InfowarsShop.com.