America, a huge state of the art concentration camp/police state not unlike conditions in Germany in the 30s, where government hates its people; turning brother against brother, neighbour against neighbour, father against son and vice versa, is the goal of the state. At the same time turning sin into righteousness and righteousness into sin, where the whole body is sick, from the toes to the tip of the head; the mighty eagle is dying, is dying; its heart has stopped beating and its soul is filled with foul and sinful demon sores. Article below from PP.tv scratches the surface of this condition. The spirit of Hitler is alive and well but will be destroyed and not by human hands. 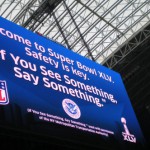 Even as Christina Aguilera butchered the words to the American national anthem before the start of last night’s Super Bowl, the hard-fought freedoms recognized in that song were being eviscerated as hired goons conducted 4th Amendment busting pat downs on people entering the stadium.

But if you think that was too invasive, you ain’t seen nothing yet. As part of Homeland Security’s complete takeover of society, at future Super Bowls, TSA agents will get to interrogate you at special checkpoints which will use “physiological” and “behavioral” tests to determine if you’re a terrorist or a criminal.

“Everyone entering the stadium must pass through a magnetometer, such as those used at airports, and get a pat down as part of the screening process. The majority of fans will enter through checkpoints on the east side of Cowboys Stadium,” reported the Dallas Star-Telegram on Friday.

Big Sis seized upon the spectacle of the Super Bowl to saturate the public with the inherently fascist public-private partnership which has given birth to the “See Something, Say Something” monstrosity, the citizen snitch program that has wiped away any doubt that America is now a rotting banana republic.

But this only marks the beginning of the role DHS sees itself in assuming as part of its occupation of the country.

Homeland Security is also developing technology to be used at “security events” which purports to monitor “malintent” on behalf of an individual who passes through a checkpoint. The video below explains how “Future Attribute Screening Technology” (FAST) checkpoints will conduct “physiological” and “behavioral” tests in order to weed out suspected terrorists and criminals.

The clip shows individuals who attend “security events” being led into trailers before they are interrogated as to whether they are terrorists while lie detector-style computer programs analyze their physiological responses. The subjects are asked about their whereabouts, and if they are attempting to smuggle bombs or recording devices into the “expo,” proving that the technology is intended to be used at public events and not just airports. Individuals who do not satisfy the first lie detector-style test are then asked “additional questions”.

The fact that Homeland Security’s own internal reports list supporting political candidates like Ron Paul, flying US flags, owning gold, displaying political bumper stickers, or owning firearms as signs of behavioral malintent that could be linked to terrorism or extremism tells you all you need to know about how FAST checkpoints could be used to snag political dissidents who commit the thought crime of believing they still had any rights under the US Constitution that Janet Napolitano is gleefully ripping to shreds.

In the coming years, staying away from airports won’t be enough to avoid a run-in with TSA goons. Homeland Security has embarked on a massive gestapo-like occupation of America where “security” checkpoints will litter highways and roads, transport hubs, as well as public events and anywhere crowds gather.

This in turn will be reinforced by an army of citizen tattle tales being trained to be the eyes of the state under the See Something, Say Something campaign, which was heavily promoted ahead of the Super Bowl.

Homeland Security has already announced that TSA agents and VIPR teams will be expanding their mobile radiation-scanning checkpoints from rest stops to highways and roads in general, as Big Sis accelerates Soviet-style levels of control over the population.

Only by standing up in unison and sending a forceful and clear message that they will resist the DHS occupation of the country can Americans hope to continue to live in a nation that does not come to be characterized as a decaying militarized police state littered with internal checkpoints manned by state jackboots demanding to see their papers, radiation-scan their bodies and conduct “behavioral tests” to prove they are well-behaved slaves.