In response to widespread protests and mass unrest, the authoritarian Egyptian government has completely shut down the country’s access to the internet, eliminating the use of social networking websites, other effective tools of communication and organisation, and effectively sealing Egypt off from the rest of the world.

“At 22:34 UTC (00:34am local time), Renesys observed the virtually simultaneous withdrawal of all routes to Egyptian networks in the Internet’s global routing table. Approximately 3,500 individual BGP routes were withdrawn, leaving no valid paths by which the rest of the world could continue to exchange Internet traffic with Egypt’s service providers.” Renesys’ analysis states. 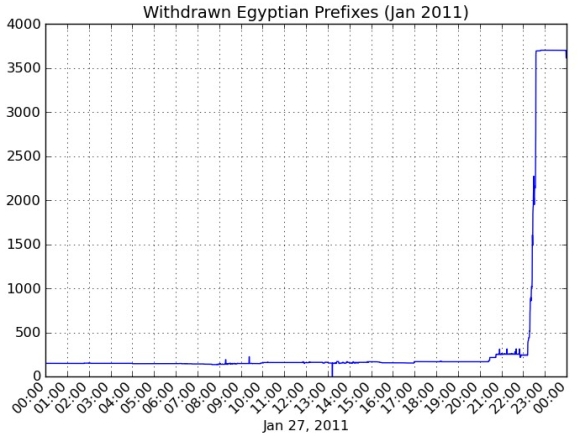 Vodafone said in an emailed statement: “All mobile operators in Egypt have been instructed to suspend services in selected areas. Under Egyptian legislation, the authorities have the right to issue such an order and we are obliged to comply.”

Prior to the complete shut down, tweets and live mobile phone feeds from the Egyptian protests in Suez and Cairo were providing up to the minute coverage. Links to photos on Twitpic, videos on YouTube and postings on Facebook were aiding protesters organize their movements.

As The Electronic Freedom Foundation notes, “When protestors in Cario’s Tahir Square experienced an outage in cell phone data service, nearby residents reportedly opened their home Wi-Fii networks to allow protesters to get online.”

The Egyptian authorities could not stand for this. Following the revelation of Associated Press footage showing a protester being shot dead in the street, one of at least eight victims who have been killed since the uprising began, an apparent Internet kill switch was thrown.

The action is unprecedented in Internet history. It is clearly the action of a desperate tyrannical government on its last legs.

Egyptian President Hosni Mubarak’s government is also reportedly arresting bloggers, attacking journalists, and rounding up anyone else the regime sees as dissidents.

Still, the Obama administration, which currently funnels $1.3 billion in military aid to the Egyptian government per year, refuses to condemn the Mubarak regime, and further more, is looking to embrace the exact same internet control mechanism in America.

Indeed, when Senator Joe Lieberman attempted to justify draconian legislation that would provide President Obama with a figurative kill switch to shut down parts of the Internet indefinitely, he cited the Communist Chinese system of Internet policing as model which America should move towards.

“Right now China, the government, can disconnect parts of its Internet in case of war and we need to have that here too,” Lieberman told CNN’s Candy Crowley last June.

Of course, the Chinese government routinely shuts down the already heavily filtered internet at any politically sensitive time, not only “in case of war” as Lieberman claims. Furthermore, Twitter, Facebook and Youtube are all permanently banned.

News websites in China now require users to register their true identities in order to leave comments, so that any dissident can be tracked and appropriately dealt with. A truly frightening Orwellian reality you may think, yet this exact move towards abolishing Internet anonymity and creating a virtual ID card is a key centerpiece of the US government’s cybersecurity agenda.

The ‘Protecting Cyberspace as a National Asset Act’ (PCNAA), which now includes a removal of all judicial oversight, is still circulating and will be voted on later this year. Lieberman has stated that the legislation should be made a top priority.

The recent actions of the Egyptian government in the face of widespread public backlash, and the ongoing stifling of the free flow of information in China should provide a stark warning to Americans that such Internet control mechanisms are the tools of oppressive authoritarian governments and have no place in a free society.

Related Reading: Obama Can Shut Down Internet For 4 Months Under New Emergency Powers